A few things that I’ve missed about England: proper bacon, not having to work on a farm to be there and of course, Nando’s. I found out that the international terminal at the airport has a Nando’s; I’ve walked past a few in Melbourne CBD but not really bothered as I’ve heard that it’s not the same. If I flew into Australia and that was the first thing I’d eat, I’d consider not leaving the airport and getting a flight out of the country, it was that bad.

The flight to Tokyo was just under ten hours long. I was pretty knackered as I hadn’t really slept well for two weeks prior to coming here; some of it self-inflicted, some of it from working two six-day weeks back to back. Despite having a baby sat in front of me, I managed to watch a movie and slept for the rest of the flight.

First impression of the country was spectacular. As my back is buggered I only brought my work bag and am just going to do my laundry two or three times whilst I’m here, all I really need is clothes and toiletries which fit pretty easy into the bag. The customers officer let the five or so people in front of me go pretty easily, but when it was my turn started asking about my luggage and how long I’m here for, then took out a folder with pictures of drugs and bars of gold, asking if I was carrying any of that on me. Of course, I wasn’t, but I wasn’t too sure whether or not to be offended or amused.

I’m staying in a capsule at the moment which is pretty cool, although technically is a dorm bed/glorified drawer. It took ages to get to as the metro here is hard to get to grips with, but after arriving and freshening up I headed towards the Sensoji Temple, first getting some food and having a look at some of the shops. The temple itself is alright, it just seems that the meaning of it has been lost and caters mainly for tourists. I did, however, take a fortune telling where you pay 100 yen to shake a box of sticks and one comes out a small hole, assigning you a drawer to pull a fortune out of. Naturally, a combination of figures assigned me to the drawer that I was supposed to open so I’m hoping that I’m not dyslexic in Japanese. 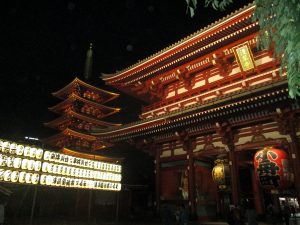 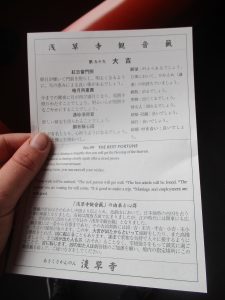 After, I looked through the market then headed to Shibuya, around half hour away on the metro. By this point I was absolutely knackered, so had a quick look around and decided that it was time for a nap. After, I headed for some food – a ramen shop next door which was bloody good. I don’t know who made the rules here – it’s illegal to smoke walking down the street, but the woman in the restaurant can have a crafty smoke whilst doing her job. After I walked back to the temple then returned to bed. 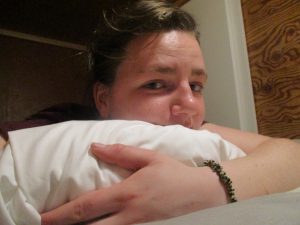 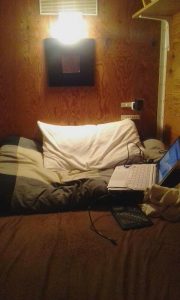 Today, I went to find some food, and ended up having a taiyaki – a stuffed pastry. I had the choice to have one shaped like a fish, or shaped like a pokemon – I ended up with the fish as it made me feel more like a grown up. On the way to the station to head to Harajuku someone came up to me and started speaking to me in German. Which isn’t the first, second, or even third time that it has happened since I arrived in Australia.

On the way to Harajuku, I stopped at the Meiji Shrine, it’s nice but just like the Sensoji temple, just seems to have lost its meaning a bit. 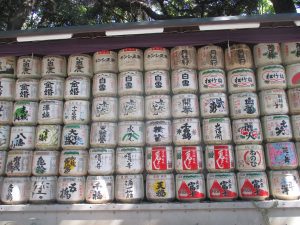 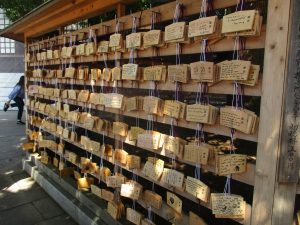 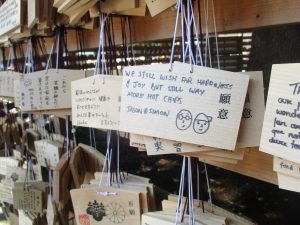 After, I went to Harajuku which is like Camden Market on steroids. I didn’t take pictures whilst I was there as it’s pretty much a lot of shops. However, there is this one thing called purikura, where you go into a themed photobooth of your choice with your mates (or not in my case) and you just pose for a picture as some models do on the screen. The Japanese girls were looking at me like wtf – it probably is something that I wouldn’t have done a year ago but I just thought it’d be funny so I did it.

I went back to Shibuya after to experience it, this time not trying to stay awake. First, I had some ramen at a restaurant where you place your order on a machine, then gave the ticket to a staff member who brought the meal to me. Pretty tasty. 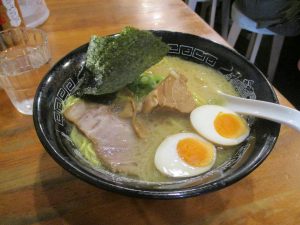 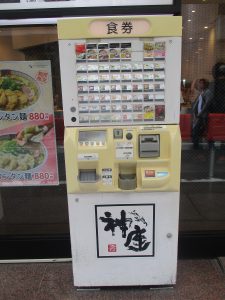 There seems to be this thing with arcade games and there’s heaps of arcades here; it is a bit uncomfortable being in the room with so many people being so into losing their money but I guess whatever makes them happy. I went into one with claw machines and so narrowly didn’t win a prize – it was hanging onto another toy by just its tag. 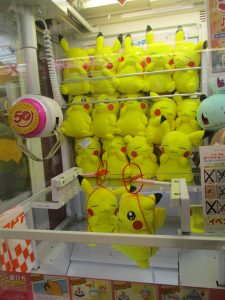 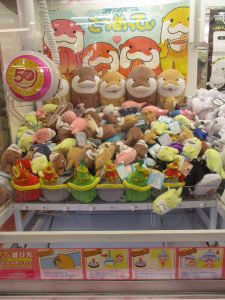 I went to Ueono, then off to Shinjuku afterwards to see what the fuss is about, and it’s just like any other place in a big city with heaps of lights. I ate in a few restaurants, had some gyoza, fried chicken, and the name of the meat on sticks I can’t remember. I managed to end up in a restaurant in an alleyway that had room for just the bar and some seats with a tiny BBQ.  Here’s some obligatory food pics:

Tomorrow, I’m off early to the fish market and will probably end up having a sushi breakfast, then off to Akihabara, and from there will decide what to do for the rest of the day.