Over the past couple of months when I’ve had two days off work in a row, I’ve slept for at least 30 hours over two days and can really feel my body just wanting to do that. I’ve tried to power through, but the past couple of days I have really felt it so haven’t really done a lot.

Yesterday, I started the day at Tsukiji Fish Market. I really had my hopes up for it being great, but had seen better markets whilst travelling through Europe – La Boqueria in Barcelona, for example. It was alright, but nothing spectacular, so I moved onto try and find some sushi in Ginza but couldn’t find anything that I was up for. Instead, I found a conveyor belt restaurant but have had better in Sushi Hub on Swanston Street in Melbourne CBD.

I then went to Akihabara, walked past the worlds biggest sex shop and popped in for fifteen minutes or so – couldn’t really help myself, then went through the electric city. When you’ve seen one shop, it’s kind of all the same, so feeling underwhelmed, I went back to the hostel for a nap.

During the evening I went to Tokyo Tower. I was under the impression that it would be surrounded by places to eat, like you would find in Europe, but apparently not. I found a place round the corner that did food in a Japanese tapas kind of style which was great. I also wanted to have a look around Shibuya during the night but as it was raining I just picked up a bowl of ramen.

Today,  I went to Miraikan, supposedly an insane science museum. I say supposedly because it was shut, so I’m going back there tomorrow. I went to the Imperial Palace after which was nice to look at but didn’t really fancy going on a guided tour of the grounds as I was wearing all black and it was bloody hot. 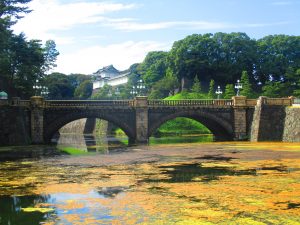 When I returned back to my bed/drawer and had a google as to what I could do this evening, though I had already decided that I would mainly chill out. On google, I found a restaurant that specialises in Onigiri (rice balls, or rather, triangles) which is Tokyo’s oldest Onigiri restaurant. To be honest, as someone who has been known to be late to work because I can’t find a matching pair of shoes, and someone who struggles to find the combination of phone/purse/keys, it is one of the great mysteries of the world as to how I found it. It seemed as though they don’t regularly have people from western culture in, and the sushi I had there was bloody good. 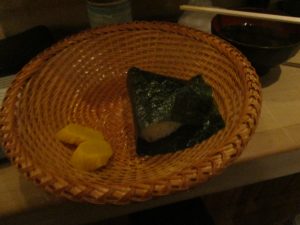 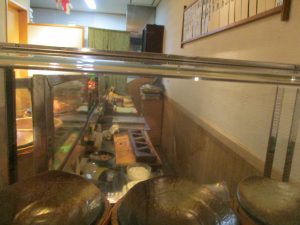 Tomorrow, I’m planning to go to Miraikan and actually get inside this time, then not too sure what I’m doing afterwards. On Thursday, I’m going to end my trip with a visit to the Robot Restaurant and have my mind blown in a ‘did I really just witness that’ way.