Before coming to New Zealand I went to Melbourne mainly for a catch up, but also to enjoy the hot weather. I very much felt I deserved it after enduring around a months worth of winter since July. We saw some of the Australian Open, went out for wine and cheese, adulted, and stayed in because it was 36 degrees outside.

The journey to Australia had a layover in China. 22 hours in the air in total, and I was looking to have a proper Chinese meal in China to get me through it. By now, I’ve had my fair share of airport layovers and normally you just simply transfer. But no. Landing in Chongqing, the 40 or so of us continuing to Australia were directed to a desk to check in, then we spent around four hours waiting, sat on the floor of the arrivals corridor, for someone to come into a security booth and check our passports, stamp them, then go through security again. With an hour to spare and no real choice of food, the Chinese I was rather looking forward to ended up being a small portion of Starbucks cashew nuts.

Arriving in Christchurch, I’d had about an hour and a halfs worth of sleep and was allowed to check in straight away. My intentions were to do a little more research on the first half of the next month of travel, to nap, and to get a phone to replace the one I smashed then smashed even more. As I arrived early I did try to go out and see the city, but I’ll be back soon anyway – thought I’d save it for a day where I’m a bit less pooped.

My intention was to start the trip properly in Dunedin – six hours on a bus. I’d caught an early one so didn’t really want to book anything for the afternoon as I have no first hand experience of what New Zealand traffic is like. Google Maps stated that my journey from the bus stop to hostel would be 15 minutes walking, and it looked more like 10. Uber wouldn’t work so I thought I’d walk. It turns out Dunedin is extremely vertical, and I’m glad I have a hire car now which I picked up yesterday morning.

Never in my life have I been refused to purchase alcohol (my first drink, anyway) and whilst in the supermarket I put a beer in my basket. I know New Zealand are strict about ID’ing people and they ID you if you look under 25. My driving license was refused as ID and was not allowed to buy the beer. In Australia you just argue a little with the person behind the till and they let you buy it on the condition that you “bring your passport next time.” The farmers market was over the road so I just bought one there instead. 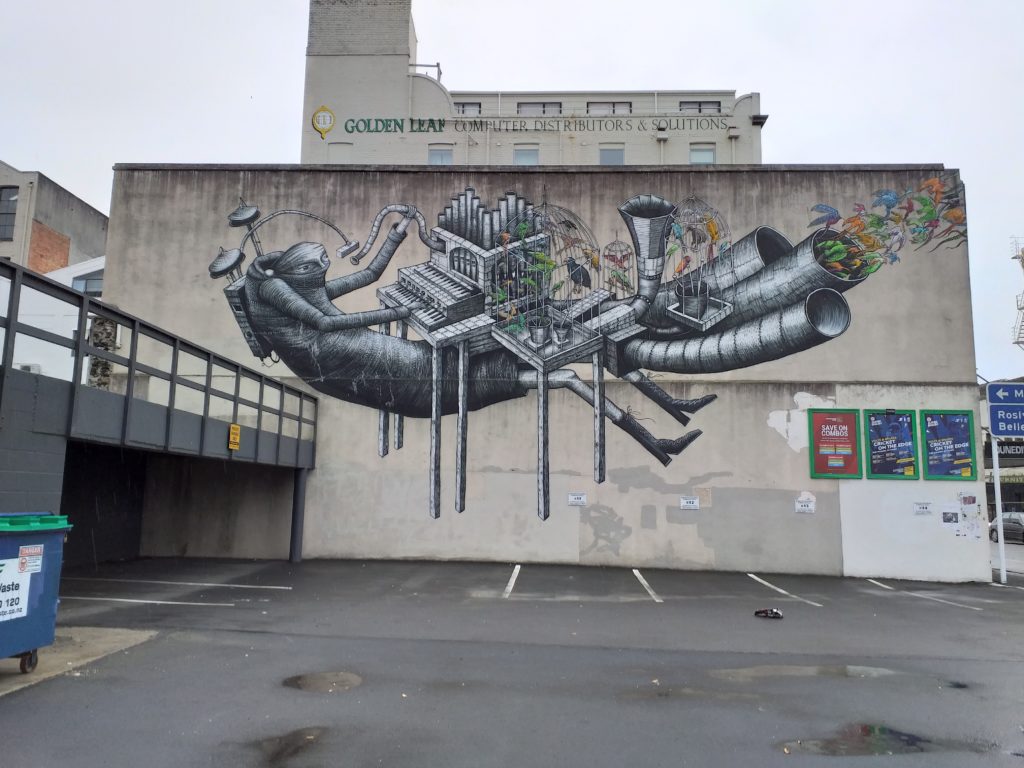 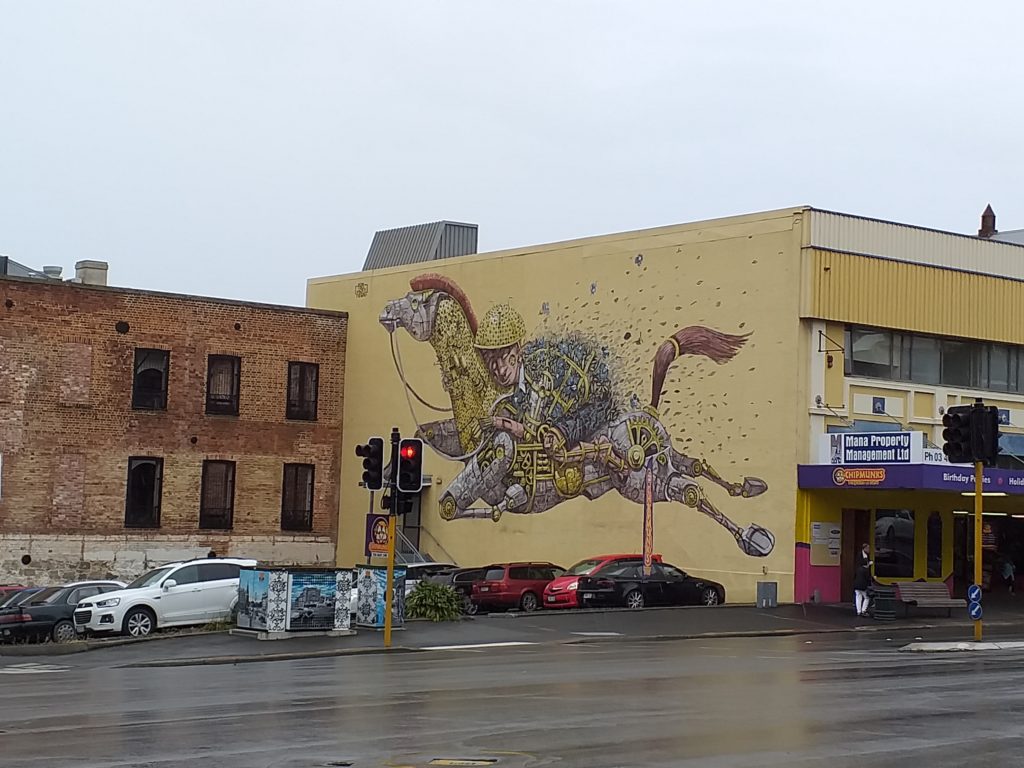 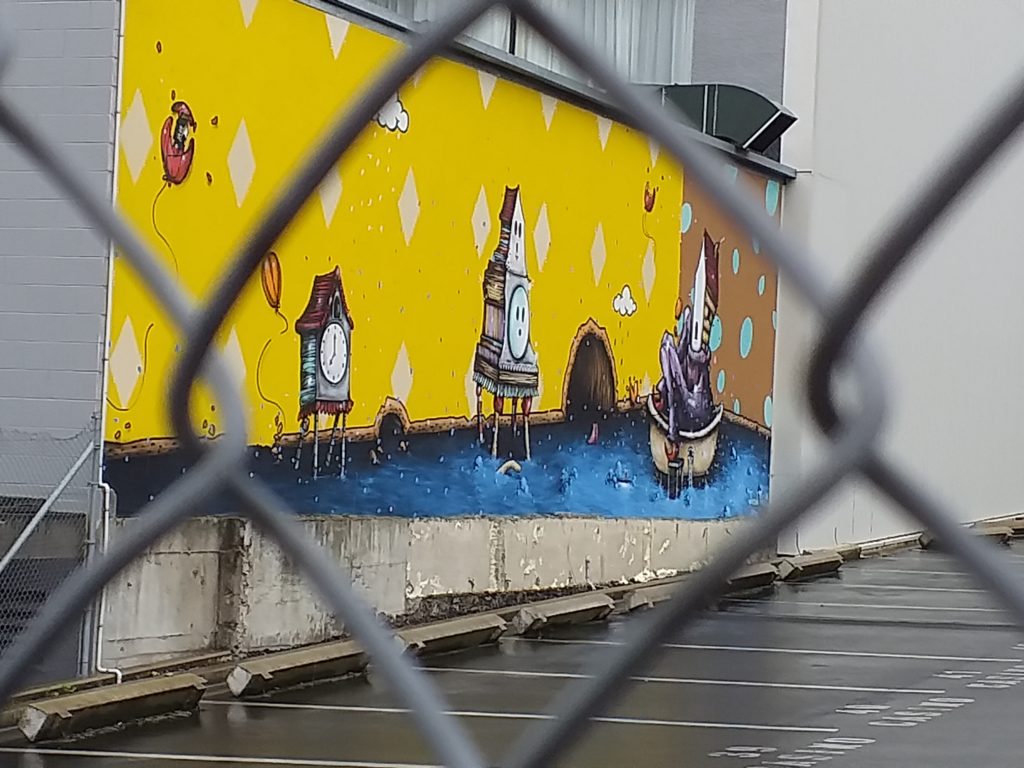 Yesterday the weather was pretty poor. Here, there are plenty of murals to help prevent the city from being so badly vandalised. As I didn’t really fancy being out in the rain all day, I went past the ones I’d seen, but didn’t majorly go out of my way to see any of them.

During the afternoon I went with Elm Wildlife Tours to see some animals, some are very endangered. I’d seen a lot of great things online about them. I knew that the tour was on private property but didn’t know that the property was privately owned by the tour company. They’re building the landscape as it would be in a native, untouched by humans, environment to help the penguins thrive, with small additions such as nest cameras and safe lookout spots.

First stop was to see some seals on rocks, where there were smaller ones learning how to swim, which was super cute. We then went to the beach where there’s yellow eyed penguins and sea lions, and on the way down we bumped into a couple of them, causing us to go back and through to the beach a different way. We sat in a few lookout spots on the beach just watching the animals. I took a few pictures, but ultimately I just wanted to watch them. The penguins share the beach with sea lions who eat them; no one can really do anything to “save the penguins” as the sea lions are also endangered. 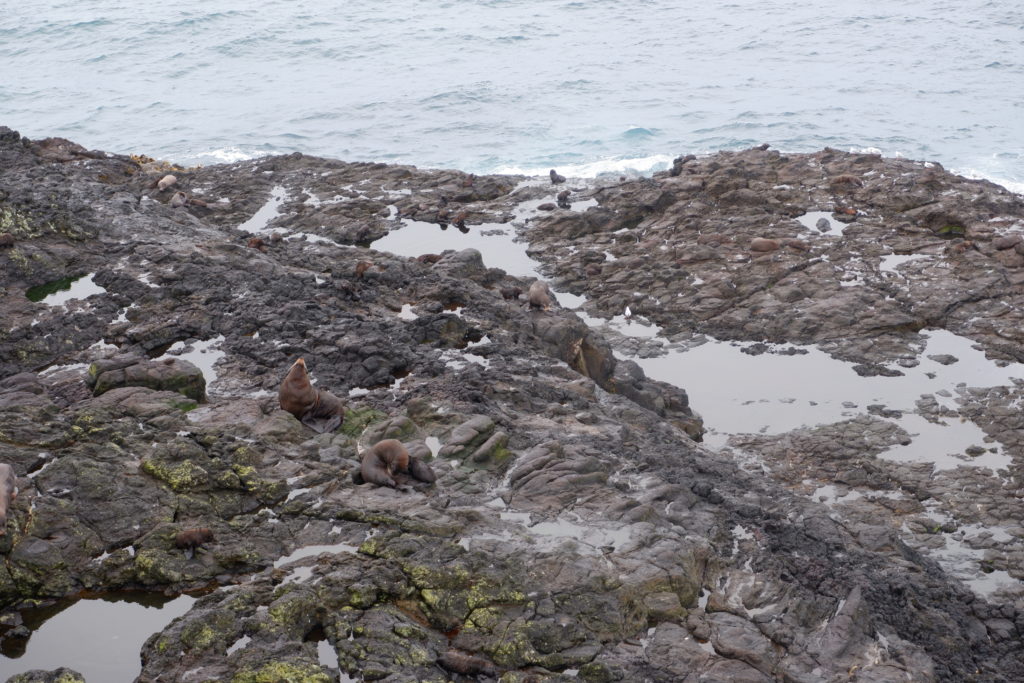 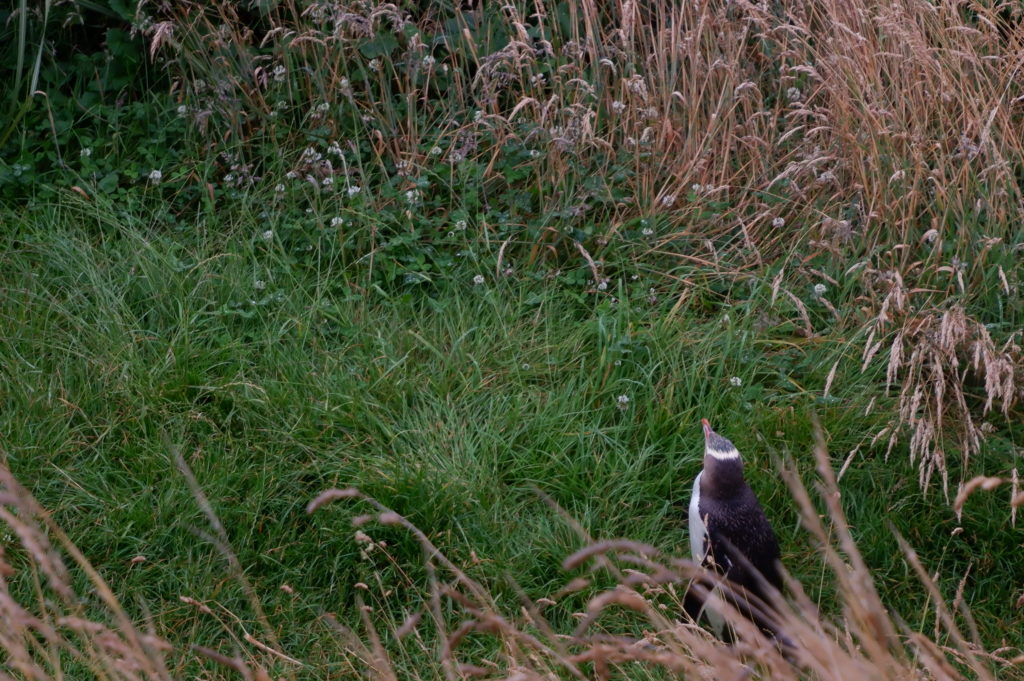 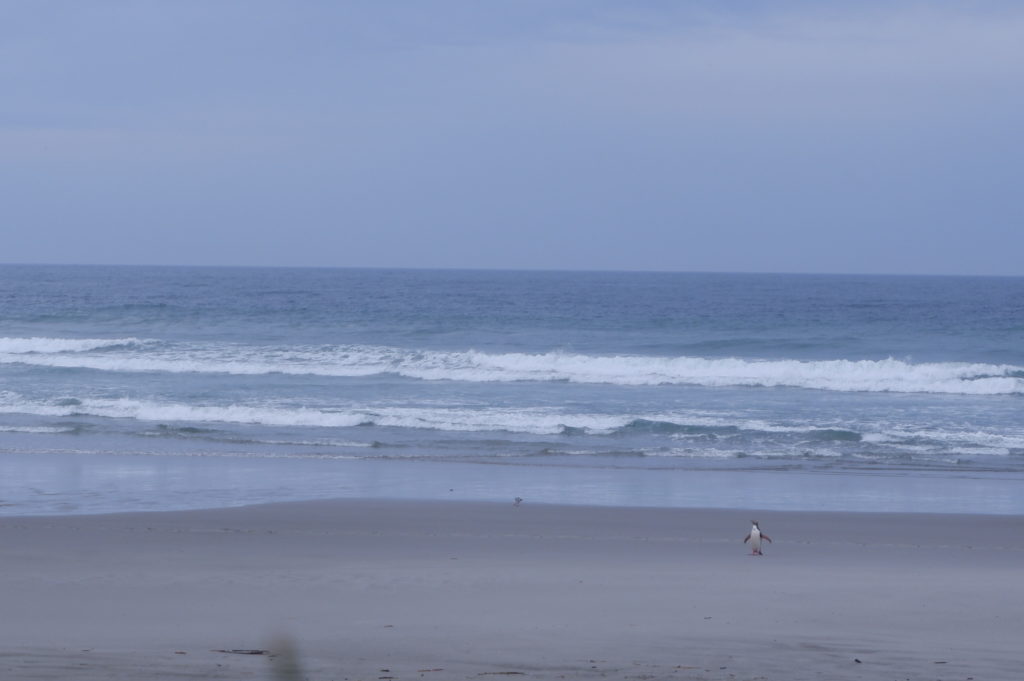 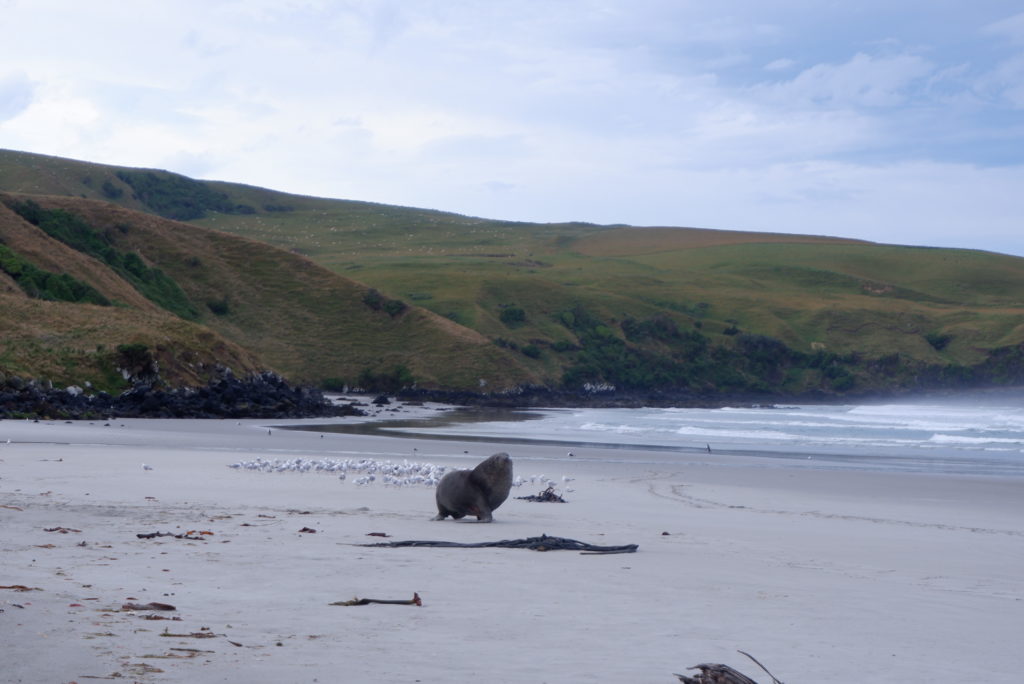 Afterwards, we went to an albatross centre for a bit of bird watching, which isn’t really my thing, but still a nice area nonetheless. We were only there for a short period of time, and then back to Dunedin.

When I went to Africa, it was great to see the animals, but the animals have adapted to being near roads. Some lions have learnt that giraffes can’t run on tarmac roads, so they chase the giraffes onto the roads so they fall over. We also did a night tour where we shined lights onto the animals, which seemed very unfair. Whilst it was great seeing the animals in the safari environment, I probably at that time should’ve looked into how what I was paying for was helping to conserve the wildlife. Yesterday on this tour I could see how some of the £60 or so I paid was helping the wildlife in the area, which I’m super happy about.

This morning the weathers nice for now, and I’m off to drive to the west.