On Thursday evening I arrived in Berlin after an six hour train ride from Amsterdam. At the start of this trip I was looking at 4 hour journeys as though they’d be horrendous, and now I find that kind of cute after having really long travel days – my longest so far has been 20 hours hostel to hostel.

It was a bit of a pain in the arse getting to the hostel, so for the evening I stayed in. Friday, I got up and was intending to do a walking tour, but there was literally around a hundred people going for the same one – I find big groups for walking tours a bit tedious and I thought that with so many people the tour would be like herding cats, so instead I went off to do my own thing. As it was my first day, I thought I’d get the standard tourist stuff done,  so I saw the Brandenburg Gate, Topography of Terror, Tiergarten, The Holocaust Memorial, Museum Island, Bebelplatz, Checkpoint Charlie and a few other places too. In the evening I met someone who was staying in the room next door to me so we took advantage of the cheap beer in the hostel bar.

On Saturday I went to the East Side Gallery. It was such a nice day, and it was great to be able to go out in a tshirt rather than a few layers and a coat, like I did when I visited last January. Quite a bit of the wall I recognised, but a lot of it either I don’t remember or its been updated. Most of it was fenced off, presumably for the artists decorating it as there was some blank space, as well as an artist painting one.

After, I took the metro to the other side of Berlin to go to Teufelsberg. It’s a lookout point that the USA used to spy during World War II, which is located in the middle of a forest. Really handy when there’s no map for the area and the GPS on my phone decides it’s not having it (#firstworldproblems). Overall it took at least two and a half  hours to find it, and on the way back I ended up having a rather unglamorous climb over a fence to get out of the forest and onto the main road. In the area is towers that were used during the war, but they have now all been used for graffiti. I think there’s only one that you can go up, but it’s a pretty big space and a good spot to have a beer.

Being English, I am not built for hot weather, and it reached around 27 degrees on Sunday. I couldn’t settle on what to do as it was too hot to be spending ages walking outside, but also did not want to spend the day in museums. I ended up going to the Holocaust Museum at the memorial which showed how families and Jewish traditions were torn apart, and then I walked to Postdam Platz, where I headed back to Alexanderplatz via the off licence and read my book outside with a beer outside the cathedral.

Today, I booked a waking tour for Alternative Berlin, and really enjoyed it – it was so nice to see and hear something a bit more uplifting than the Berlin Wall and World Wars. The guy doing the tour used to be a history teacher in London, he took us to a couple of places in East Berlin, as well as an outdoor gallery/club scene place around the corner from the East Side Gallery, before heading to West Berlin to see some more. I’m quite gutted that I no longer have time to spend in Berlin, otherwise I’d check out the places tomorrow. The company was Sandemans which have always been good.

We got to see some artists painting, and this piece will represent the USA voter running into a hole if Donald Trump becomes the next president: 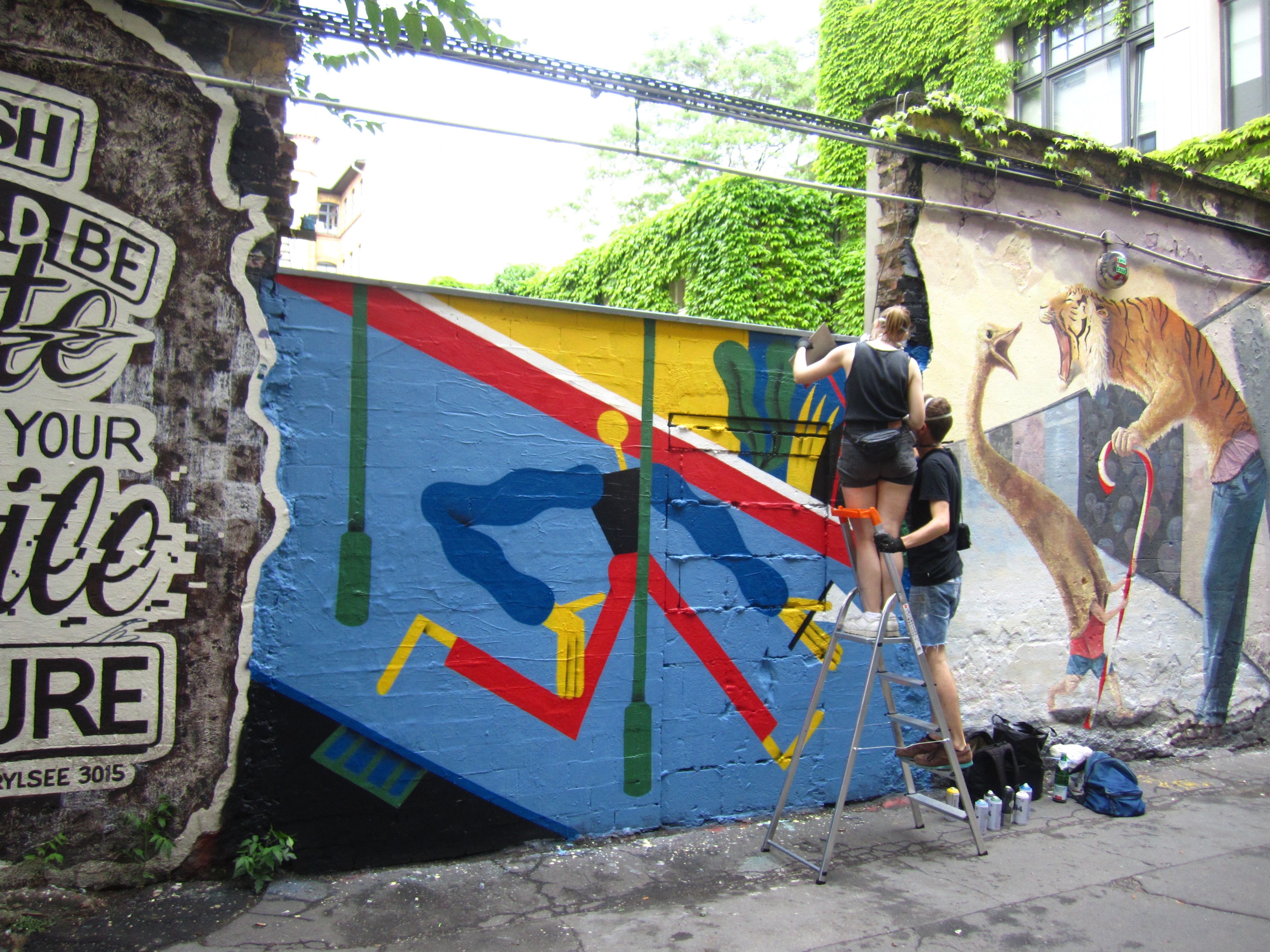 During the evening I arranged to meet with someone and had a drink before going to a comedy show in the bar next door, it was a great way to spend the evening.

Overall, I really liked Berlin, and now that I know how to go about the solo travel malarkey, this time was better than the last. I definitely think I’ll be back here at some point as I feel as though I’ve missed out on a bit of the city,  but still enjoyed it nonetheless.