To get to Madrid there was a 4.5 hour bus journey to face,  which actually wasn’t as soul destroying as it may sound. The hostel was easy to find, I checked in and was given some recommendations for things to do and places to eat, so naturally, I went to get some food.

I found a nice tapas bar where I ordered grilled goats cheese and some salt cod fritters – both were delicious. I found it quite amusing that the waiter told me to order two dishes instead of three because it was too much. I listened to him and thought that it was cute that he thought that because he quite obviously underestimated how much I can eat especially when I was as hungry as I was. I skipped an artichoke dish, but I could’ve eaten it.

After,  I came back to the hostel via the food court in El Courte Ingles, which is supposedly great, but it reminded me of a certain other place so I didn’t stick around for long. I didn’t do much for the rest of the day to give my body a chance to rest as it’s been a bit of a mental week with not much of a break.

There’s a flea market in Madrid every Sunday morning so I visited it, and to be honest it was a bit underwhelming – a bit like Camden market, the stores were pretty much clothes, jewellery as well as some homeware kind of stuff. I realised I was in dire need of a coffee so I stopped by a cafe where I had one with a carrot cake which was one of the best I’ve had for a while.

After I went for a walk from the market to the Royal Palace, back into the main street then went to a place that was recommended for lunch. I had beer marinaded chicken with bacon and chips, it was pretty standard but was a man vs food portion (food won this time).

After I had to re-check in to the hostel as they had to empty the room for another group of people. I had a Google of things to do in Madrid because I didn’t research the city, I was more like ‘sod it, I’m going to Madrid’ and ended up at Chocolateria San Gines which is supposed to be the place to go for churros in Madrid. They were good, but I’ve been finding myself not too fussed by sweet things since I’ve been away.

After the churros I walked to a park on the other side of central Madrid to read a book somewhere quiet. I was walking on a path and saw someone I went to a bar with in Seville which was pretty crazy – it seemed like both of us made plans to come here a few days ago. I also bumped into someone in Granada who I’d been chatting with during dinner in Seville, who worked round the corner from me in Courchevel 1850 – a ski resort in France – but a few years before I was there. Once I finished reading, I did the usual and chilled in the hostel.

On Sunday night it seemed like I was sharing a room with Snorlax (the pokemon, for those who don’t get the reference) and didn’t sleep well at all. I went out and got a big coffee, then went on a walking tour. The guide was really good and was easy to pay attention to before the caffeine kicked in, but I have to say that I am starting to get bored of looking at cathedrals and whatever with stories like “the king did this and someone didn’t like it” – obviously in more detail, but still.

After the walking tour, I went to check out a street art gallery, but it seemed like the Spanish were on their bloody siesta. There were great pieces outside the gallery, so I had a look before going to grab some more churros, and then came back to the hostel to try, and fail to have a nap. After nothing really exciting happened, I got some tickets to get out of Spain later this week and went for dinner because this hostel is boring me a bit.  Dinner was average, artichokes with ham for starters, then overcooked lamb chops with chips.

Tuesday morning I headed on the metro to get my tickets to Toledo for Wednesday. I came back for a bit, then went to look for a street food market, which I would’ve eaten from in England, but was generic stuff like burgers. I went for a walk to the market, had a quick look around then went, and got incredibly lost on the way, for lunch. I went to a restaurant that was recommended and ordered some orange marinaded pork tacos with guacamole and black beans. The portion was pretty light and I could’ve done with a side dish,  but it tasted so good. Their sangria was bloody amazing too. After, because it was 15 degrees and sunny, I went and sat in the park for a bit, before returning to the hostel for free food.

On Wednesday, I went to Toledo, which I posted about here, as this post is probably long enough to be classed as  dissertation. After, I went back to the hostel, had some food and wine, then started chatting to people for a couple of hours.

Thursday was my last day in Madrid. My train out was at 9.50pm so I had literally all day to kill. I slept in, allowing my poor little legs to recover from Toledo, then went for a walk around Madrid. I ended up at a place called El Tigre, where they give you a massive plate of tapas for free with your drink, and they topped mine up when I finished. I was going to walk to another restaurant to get a round of tapas again, but couldn’t walk the food baby off. Instead, I surrendered to the food court in El Courte Ingles, bought a glass of wine and sat on their balcony with a book until I had to get my bags from the hostel. 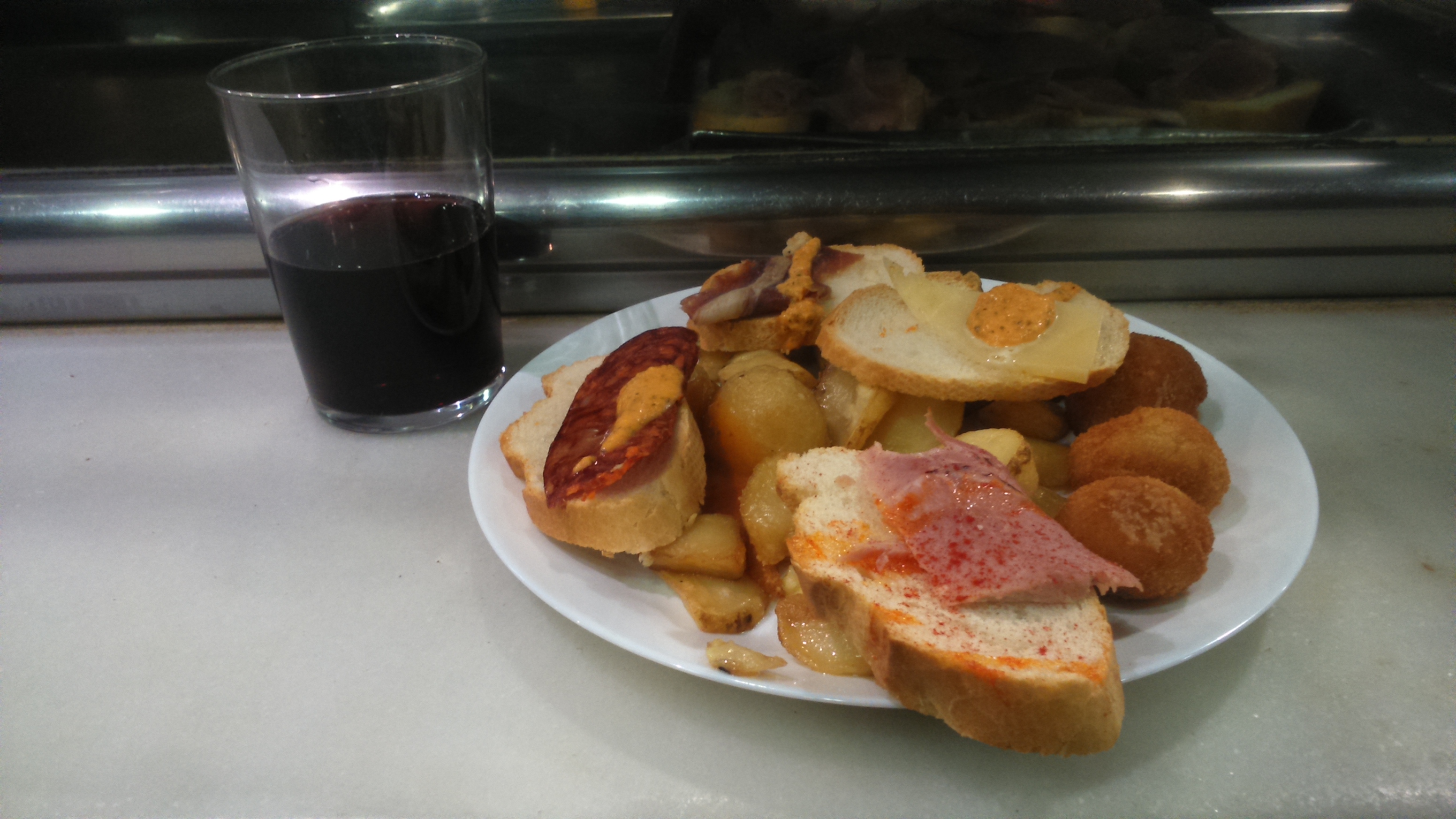 Overall, I liked Madrid, but I think that as I’ve just moved from a big city, the excitement of being there wore off quickly, and as I didn’t want to go to galleries, museums etc, all I could really find to do was shop, which is impossible with my small backpack and eat. I have to say that the food was fantastic here.