I had another early start on Thursday to catch the train from Malaga to Ronda, and it seems as though for the time being that I have also left the nice weather behind too. I walked so much during my time in Malaga that I was pretty sore, plus there was no safe way out of the top bunk in the hostel apart from hoping for the best, so the amount of bruises I had from climbing in and out of bed didn’t really help. 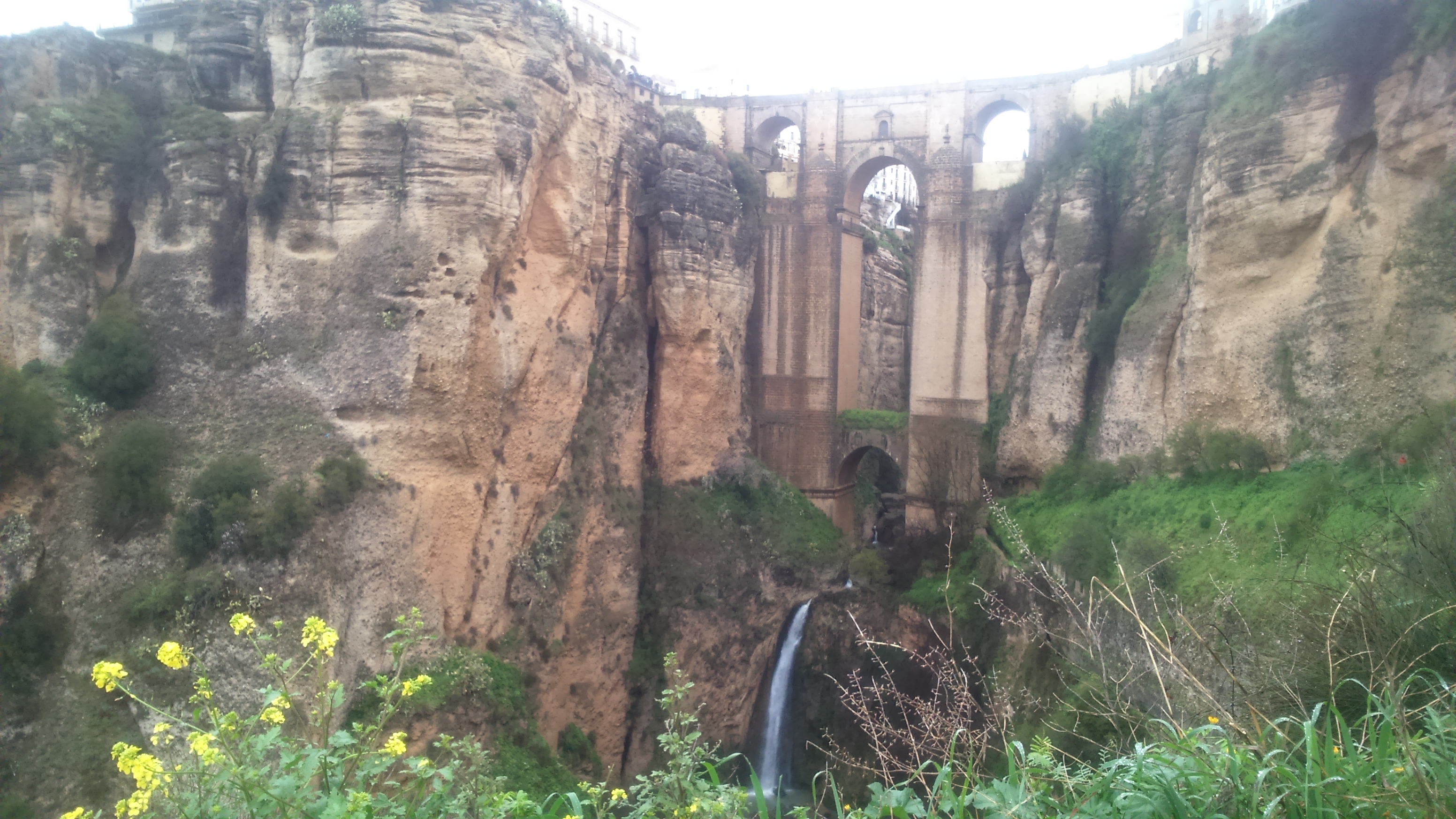 The journey on the train was just under two hours, I made an impressive start on the book that I’m reading. Once I arrived at the hotel, I was so knackered that I’m pretty sure I asked the receptionist “¿hablas español?” instead of asking if he spoke English. At the moment I’m trying and succeeding at speaking as much Spanish as I can, but don’t want to practice whilst dealing with accommodation and train tickets in case I end up booking a one way ticket to Mars or something

I ventured out and bought some lunch and had a coffee that was very much needed before going to the famous bridge – Puente Nuevo/New Bridge – which looked like it was part of the Lord of the Rings set. Ironically, the bridge is at least 300 years old. There was a lot of tourists on top of the bridge but there was a path leading to the underneath of the bridge too, I got halfway down and as it had been raining I thought that I was already off the beaten path and that I didn’t need to fall off of it, so I went back and checked into the hotel properly, chilled and napped for a bit, before heading off for dinner.

The next day after breakfast I headed to the bullring which has a relatively small museum which displays costumes, guns and paintings, as well as the obvious – a bullring. It took around 45 minutes to go around it, and someone got chatting to me at one point and asked me what I was intending to do for the rest of the day. I told her I was going to just chill…. it didn’t happen.

Instead of chilling, I had a couple of hours to waste as the hotel room as being cleaned. I went over the bridge and saw that you could access another part of it, so I tried to get there. It turned out that if you go behind the bridge and take a bit of a walk it leads to the Arabic Baths and what seems to be the remains of a castle which was a bit of a health and safety nightmare.

The Arabic Baths made me feel pretty lazy despite the fact that I have walked miles over the past week or so. They were built at least 500 years ago, without the use of electricity or modern-day construction equipment. The builders would have had to source the materials, transport them and then construct them, and they would have had to do the same with the bridge. And there I was, 500+ years later, someone who on a regular basis gets a tesco meal deal on a day off because making lunch myself is too much effort.

During the afternoon I was in the hotel researching some places to visit on my next stop. Initially, I was starting my trip in Seville but my plans changed so I shall be there next week and I have some pretty good stuff planned. I went out for dinner at a tapas bar across the road from where I’m staying, four plates of food and a glass of wine came to €9, which is amazing considering that there’s some restaurants in London that charge more than half that for a bottle of coke. It was my first authentic Spanish meal of this trip and I cannot wait for more to come.

My last day in Ronda I went for a walk further into town, it was raining so I didn’t want to stay out for long. It seems as though I have done everything I wanted to do that this region has to offer – I would have liked to visit some vinyards but I’m pretty sure that anyone who has heard how my driving test went would understand why I don’t intend to hire a car. I spent the rest of the morning and most of the afernoon in the hotel, before deciding to go out as I haven’t gone on this trip to do what I’ve done in London for the past year and a half – which is near enough nothing. I went into a tapas bar in town with a book and had a glass of wine and some olives. After I came back to the nice, warm hotel – I hadn’t drank enough wine to warrant a beer jacket, or as I like to call it a bacardigan. I wrote most of this post/essay and killed some time before going out for dinner.

For dinner,  I only really wanted three to four plates of food and a glass of wine. I ended up about a minutes walk away in what seemed like a bar with a few cold plates for food, beer and wine. I thought I might go on a mini tapas bar crawl instead of getting all my food in one place. I think by now I should learn that what I am expecting will not actually happen; I spent a couple of hours in a bar called Bodega Jerezada, having a conversation in Spanish with the man behind the bar. I was going to leave and left a tip and got offered an extra complimentary glass of wine with cheese, and some jamon. It wasn’t an in depth conversation because mi español no muy bueno but we talked about young/old wines, football, physics (I’m  not joking) the different types of jamon, the presidential election in Spain – apparently the politicians in Spain don’t chat that much shit compared to the English (yes, I asked) and of course, the weather. It was my first time talking with a Spanish person besides asking for food and a carrier bag and I’m impressed with how I was able to chat with confidence, of course, not everything was understood but it goes to show how far the basics of a langauge go. I really enjoyed the evening.

In the morning I need to pack my bag to go to Seville. It’s going to be a 3 hour train ride to get there which I anticipate will be slightly soul destroying, but I cannot wait to get there. I’m so glad I decided to stay in Ronda as opposed to doing a day trip so I could take it easy and have some authentic tapas, but I’d recommend two nights instead of three.